And anything else wild, furry or feathered… All photographs © Heidi Farmer

Ever looked straight into the eye of a bird that could literally rip your eyeball out?

Every year the Audubon Society of Rhode Island hosts “Raptor Weekend” at their facility in Bristol, RI. This is a dream come true for many of us novice photographers and/or seasoned birders who may not have every day luck of stumbling upon a rare bird of prey in the wild.  Even if you were to see one, chances are it’s not going to stick around very long for you to admire it, and if it does… you better think twice about that urge to get even closer.

These talons are not something to take lightly…

This is my third straight year attending, and each year instead of feeling as though I’m seeing the same ol’ thing, I actually leave with a “re-charge” of sorts that inspires me to want to encourage others to become interested and attend.  We’ve all had the pleasure of getting to know a couple of the birds well through Master Falconer Lorrie Schumacher (Talons!).  She brings her Bird of Prey Experience to another level by allowing us to experience an close up one-of-a-kind, intimate, show with the birds she cares for.  And I though I had a bird connection??

One of the most interesting parts of this event is actually seeing the incredible bond she and her daughter share with these raptors.  They actually share the same quarters in their house!  I joked yesterday in a picture I posted that their Barn Owl “Oliver” likes to be scratched on the head (it’s true), and that I want that job (even more true). 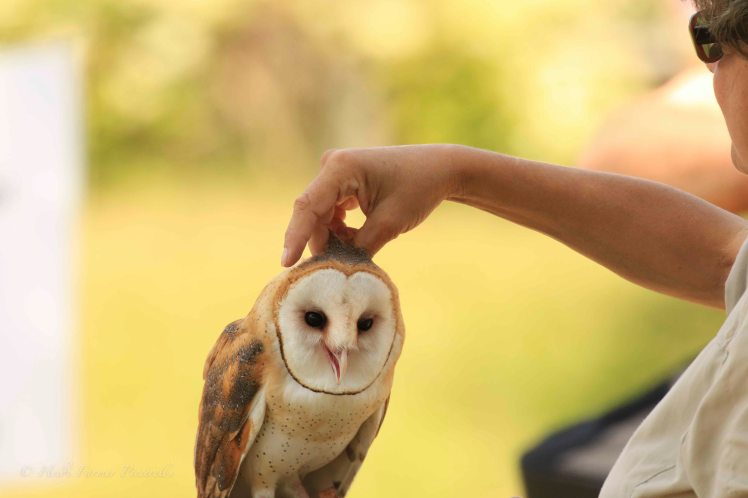 Oliver is a show stopper (and a bit of a ham).  This is definitely not a camera shy Owl:

Next up on the raptor runway was “Prince Ravi”, a gorgeous Saker Falcon from the Middle East.  This is some Prince… 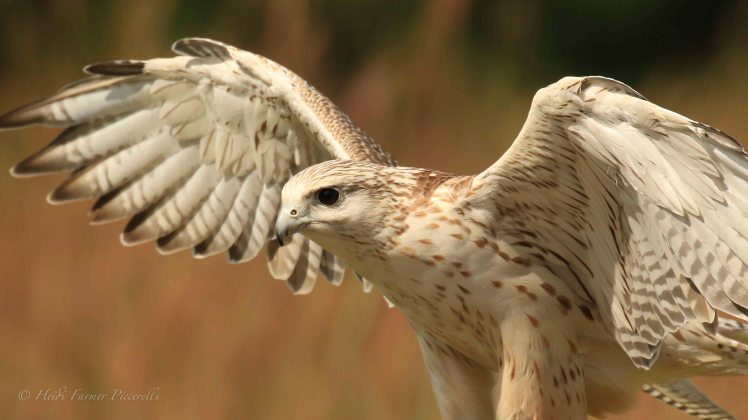 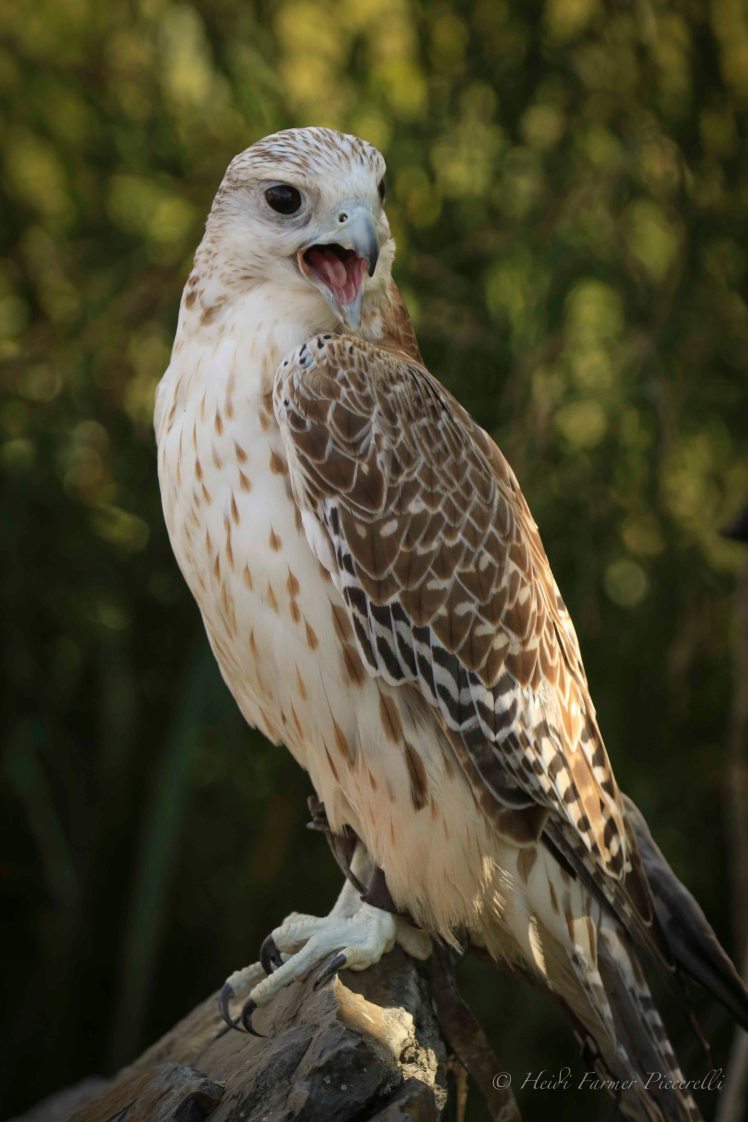 I think he was looking for a Princess. (Sorry, buddy, I’m spoken for).

Next, Lorrie brought out a crowd favorite named Machu – A confident Harris’s Hawk who wins the crowd over every year with his majestic flight up to the roof of the Audubon’s facility.  This year, nature intervened and we were treated to something pretty special.   Machu set out for his flight, but instead of landing on his well known perch decided to dive for cover into the top of a tree just below the roof.

Uh oh… That didn’t go so well…  (although all of us standing below were thrilled to be able to photograph him in an actual tree).  After numerous efforts to coax him out, with no luck, Lorrie finally understood what the issue was, and the best educational piece of the day unfolded.  Soaring high above was a Red-tailed  Hawk which, to Machu, is a predator.  It almost looks as though he is trying to point that out to Lorrie in the photo above.

Machu wasn’t going anywhere until his coast was clear, and as you can see was making sure that Hawk was long gone before leaving his cover: 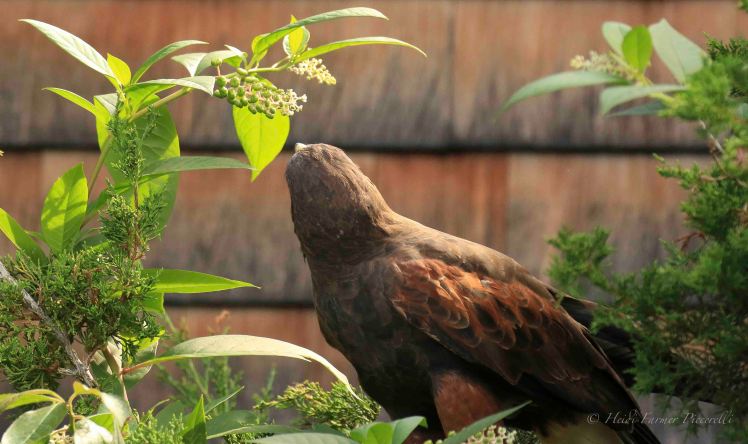 Then, one last look into the lens – thank you, Machu. You are one handsome bird, and something tells me you know that since you’re giving me that “enough already” look. 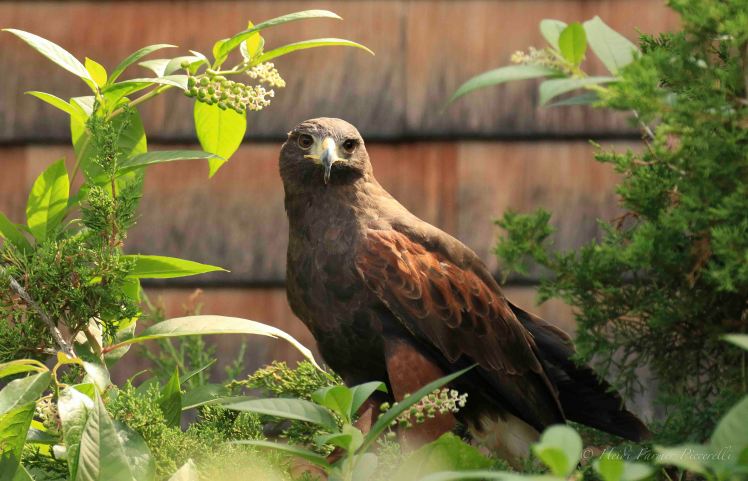 When Machu was back on land, and enjoying a treat, he was still observant and on guard as the Red-Tailed Hawk came back for another look.  You can almost see the Hawk’s reflection in Machu’s eye. 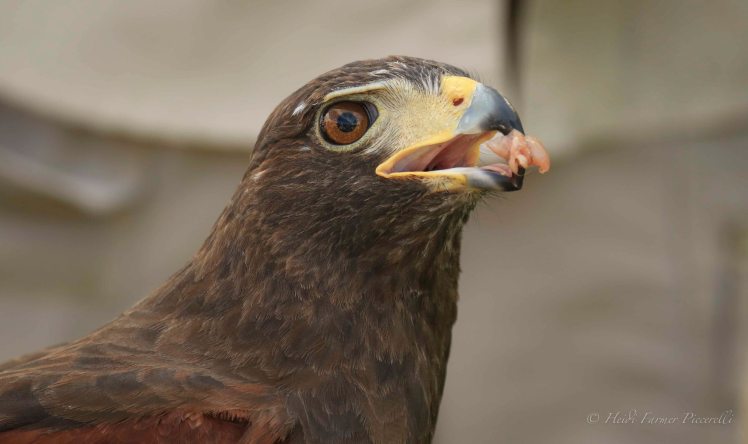 Finally… “Big Mama” makes her yearly appearance, and the crowd gathers.  This massive European Eagle Owl is so incredible to watch as she flies from one perch to the other between two rows of open eyed little humans (remember the Talon photo in the beginning of this post?  Those belong to her).

Big Mama has her eyes on the prize, and look at the precision of those talons as she prepares to land on that lil’ snack.  She has no interest in sharing with anyone, and you better not get in her way.

Big Mama probably has more portrait photos than any other raptor in the Talons! family.  Absurdly majestic, one can’t avoid getting drawn into those magnificent eyes of hers (just don’t stare for too long!).

Looking forward to next year’s event, and to seeing our feathered friends again.  Keep your eyes open for events like this around you.  Truly inspiring!

P.S. If you missed the event, you can still check out the amazing photography work of Peter Green of Providence Raptors. His photos will remain up in the gallery in Bristol through October.

Lover of all birds, wildlife, the great outdoors, and sharing stories through my lens.